Elmar Karla is a muralist, painter, and illustrator based in Bremen, Germany. Absurd, bold, and detailed, his work’s beauty borders discomfort, which is really just misinterpreted uncertainty. Discomfort is fertile — new directions often take root in gray murky areas. Karla’s work carves a space for the uninhibited exchange of ideas. 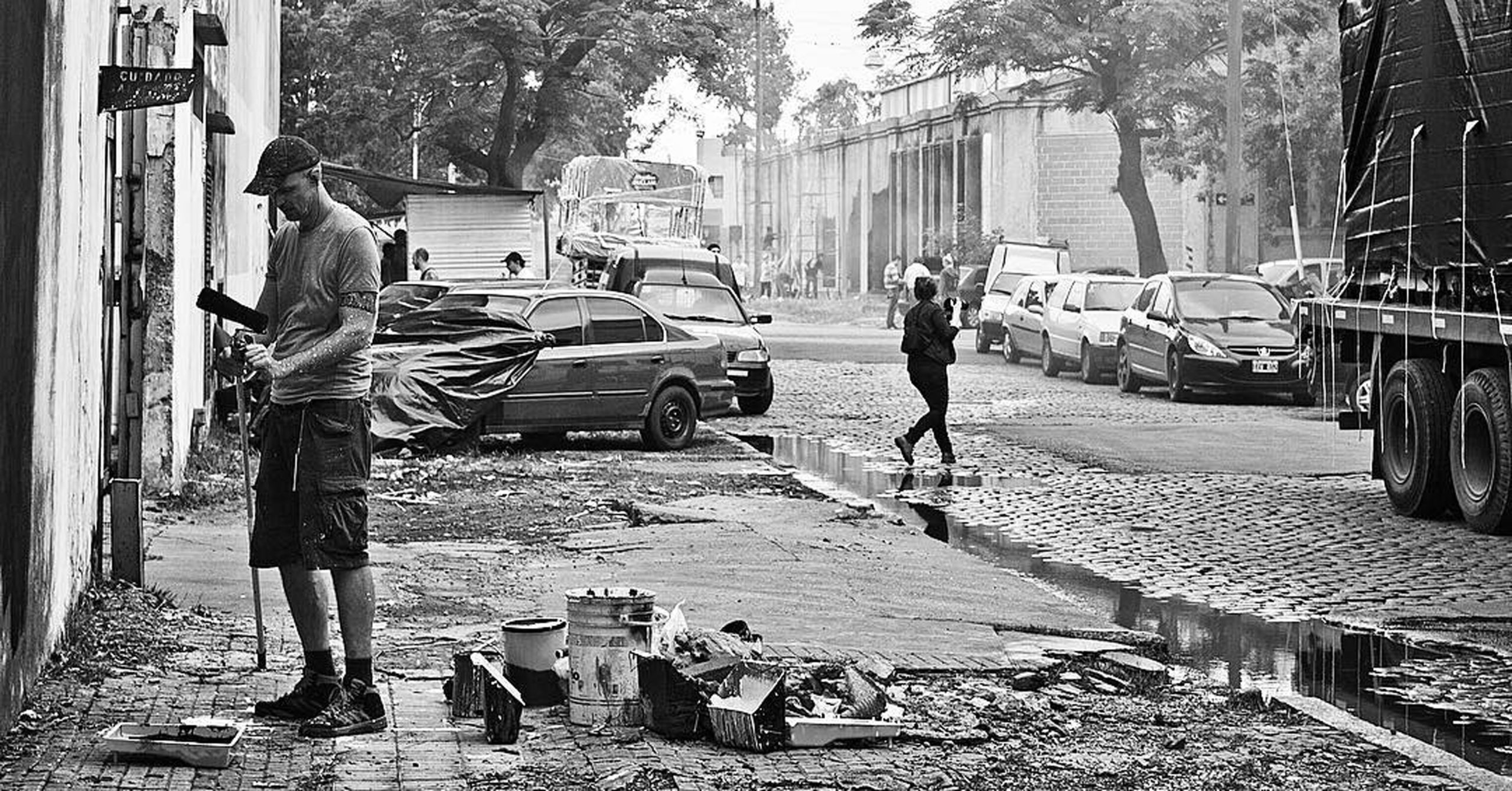 The artist grew up in a close-knit, rural village near Cologne, Germany. Experimental and curious, his changing center of balance tipped him towards the city’s independent subcultures around age 16. He began exploring the city’s Goth and New Wave scenes. Influenced by the raw emotion found throughout counterculture, he joined Antifa and experimented with Crossover and Grunge – anything to escape normalcy’s stalemate.

Karla began writing graffiti in the late 1980s, inspired by Wild Style, Style Wars, Martha Cooper and Henry Chalafant’s iconic Subway Art. These were German Hip Hop’s early days; venues like Underground and Luxor were petri dishes ripe for breeding new movements. Cologne was the capitol of European contemporary art, and kept an intimate exchange with New York City that led to graffiti’s German rise. Karla started writing ‘LIE’ because it was short and easy. He liked the questions it raised.

In 1992, he began studying at the Düsseldorf arts academy. Ever the inquisitive contrarian, Karla dropped out just two years late, upon developing a marked distate for academia. The fledgling fine artist stuck to his craft on his own terms. He spent the early 2000s traveling extensively through South America, exploring Buenos Aires and realizing his affinity for the muralismo tradition.

Karla has historically drawn upon visual cues revolutionized by the visual vanguard in his purposeful development from illegal to unorthodox artist. He maintains strong motifs of his original grit alongside elements from Magritte, Caravaggio, Basquiat, and the like. These varied influences allow his work an expansive emotional palette ranging from revulsion to curiosity to ardor. Karla manipulates and toggles these disparate inputs in real time, imbuing recognizable cultural icons with a hyper-reality that looks like they could jump dimensions.

At every stage, Karla has remained doggedly authentic in his conquest towards free expression, persistently questioning his own principles in a manner that spurs ceaseless evolution. He someday hopes to create at least one piece that will stand for centuries and make a tangible impact on society. Until then, the artist focuses on living each moment to the fullest, gleaning all he can learn from this experience of consciousness.

Karla has brought this missions to institutions including Germany’s IBUG Festival, The Museum for Urban Art at the NSDM Dockyard in Amsterdam, and Hamburg’s Urbanshit Gallery. Karla is also half of Thealang Collective alongside his longtime friend and painting partner LAPIZ. He has collaborated with artists and friends like Milu Correch, Lean Frizzera, and Diego Cerulli.